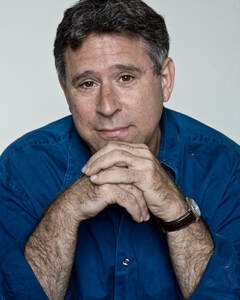 ​ Joe Gilford has spent his entire life in theater, film and the entertainment world, the son of actors Jack Gilford and Madeline Lee. He has been a filmmaker for 50 years,  writes screenplays, TV scripts, stage plays and brings his knowledge of storytelling to students everywhere. He is the winner of a New York Emmy, has been nominated for the Drama Desk Award and built a reputation as a screenwriter and teacher for the past 30 years.

Raised in New York's Greenwich Village, he was captivated by the Underground Filmmakers of the 1960s as a teenager and started making his own 8mm films with his high school friends.

He went on to earn his BFA at NYU's Institute of Film & TV where he wrote and directed Max, a short film starring his father, Jack Gilford, premiering at Radio City Music Hall in New York and playing dozens of film festivals and television all over the world. He put in a few years as a movie Production Assistant working on every type of film in New York.

​Joe spent a decade as a stage director in New York’s off-off-Broadway theatre scene of the 1980s & '90s.  He started writing his first plays which debuted at the famous West Bank Downstairs Theater Bar, where performers like Lewis Black and Tony Shaloub were starting their careers. He also began his work as a screenwriter.

Joe adapted his parents’ experiences as blacklisted actors in the 1950s into his critically acclaimed 2013 stage play Finks. It was nominated for two Drama Desk Awards, Outstanding Play and Outstanding Leading Actress (Miriam Silverman) and Best New Play by the Off-Broadway Alliance. It had the honor of being videotaped for Lincoln Center's  Theater on Film & Tape archive. Finks was also produced regionally, including TheaterWorks Silicon Valley and had its Los Angeles premiere at the Rogue Machine Theater Co. starring French Stewart.
Finks is currently in development as a feature film. Michael Pressman is the director.

Joe's latest feature screenplay Mob Town, released in theaters in 2019 and now streaming, is the true story of the famed 1957 Appalachian Meeting of over 50 mafia leaders in upstate New York.  It stars David Arquette, Jamie-Lynn Sigler and Robert Davi.

After many years teaching screenwriting at NYU’s Tisch undergrad film and other film programs, Joe put all his experience and knowledge into Why Does the Screenwriter Cross the Road?…and other screenwriting secrets (Michael Wiese Books) which has become a popular guide for screenwriters everywhere. Joe started StoryRescue.com in 2005 and has helped  writers and storytellers at every level in screenwriting, playwriting, TV and fiction.

Joe has received two Alfred P. Sloan Foundation grants for his plays about science,  The Radio Boys, about Edwin Armstrong and his invention of FM radio, and Danny’s Brain about brain injuries in American football. Visit the New Play Exchange for more about Joe's plays. Joe is a longtime member of Ensemble Studio Theatre in New York and its fabled Playwrights Unit.

Joe's long career producing and writing television documentaries earned him a New York Emmy Award for his work on New York's local WNET (PBS) City Arts series. For PBS’s Great Performances, he wrote the original script for The Great American Songbook, a history of American popular song hosted by Michael Feinstein.  Also for PBS, he wrote the documentary, Beyond Wiseguys: Italian Americans and the Movies, hosted by John Turturro and featuring Paul Sorvino, Marisa Tomei, and many others.